High performance heat exchangers
in cooperation with Plansee SE for

With the fusion device Wendelstein 7-X, the Max-Planck-Institute for Plasma Physics (IPP) is investigating the theoretical and physical princi-ples of future energy production methods. The institute is researching the energy production by means of fusion power plants, in which the atomic nuclei of a plasma mixture of deuterium and tritium weighing only a few grams are to be fused, producing enormous amounts of energy. Accord-ing to calculations, one gram of the fuel would be able to generate 90,000 kilowatt hours of energy.
But the institute is still doing basic research — the aim at Wendelstein 7-X is to produce a stable 30-minute plasma discharge to demonstrate the suitability of this type of device for continuous operation.

An ambitious goal: making the energy source of the sun available on earth

In a fusion power plant the energetic processes of the sun are to be reproduced on earth, i.e. generating energy from fusion of atomic nuclei. The best way to produce fusion energy would be with a mixture of deuterium and tritium, which turns to plasma when exposed to immense heat. The test facility Wendelstein 7-X, however, will not work with the actual power plant fuel, because its aim is not to produce energy, but to research the suitability of this type of device for a fusion power plant.
Nevertheless, this high temperature plasma has to be heated to a tem-perature of 100 million degrees Celsius.

In the plasma vessel, the hot plasma has to be kept away from the vessel walls. To do that, 70 superconducting magnetic coils produce a magnetic field to keep the hydrogen plasma suspended. During operation, liquid helium flows through the magnetic coils and cools them to nearly –270 degrees Celsius.

Despite the use of this complex technology, the outer edges of the hot plasma still touch the walls of the plasma vessel. Although the temperature here has already “cooled” to about 100,000 degrees Celsius, the vessel walls need to be protected effectively and the heat has to be safely conducted away from them.

Here, as in many other areas of the facility, the scientists and specialized companies involved in the development of Wendelstein 7-X had to continuously come up with new, innovative solutions.

Plansee SE developed special high performance heat exchangers for IPP for the areas of the plasma vessel wall exposed to the highest heat load. These heat exchangers, socalled divertors, consist of carbon fiber reinforced carbon (CFC) and a watercooled metal block made of a special metal alloy. These divertors are then attached as “wall elements” to the crucial areas to effectively divert the high heat flux as well as remove im-purities from the plasma.

A particularly difficult aspect was the joining of the carbon fiber reinforced carbon (CFC) with the metal alloy of the cooling block, as the carbon is exposed to the high temperatures of the plasma while water flows through the cooling block at high pressure at the same time.

Regarding the optimum joining technology for this connection, electron beam welding specialist PTR STRAHLTECHNIK of Langenselbold near Frankfurt am Main was able to deliver. The cooling block made of copper-chromium-zirconium and the CFC material coated with a thin layer of copper were perfectly joined with PTR electron beam machines to welding depths of to 30 mm.

The pieces were welded with a pulsed electron beam with acceleration voltage of 150 kV. Thanks to an extremely narrow weld seam with minimum heat penetration, the CFC material remains undamaged, and the required overall heat conductivity from the surface of the carbon layer to the cooling block is guaranteed. 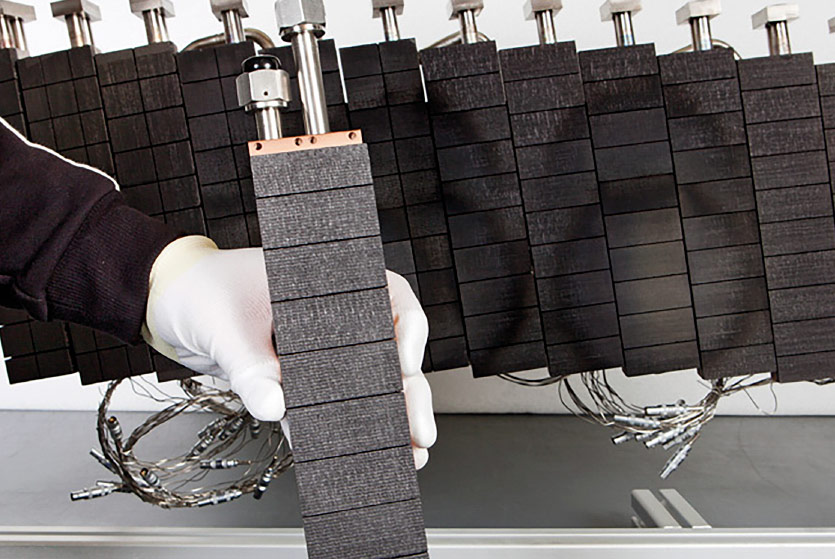 HHF diverter for W7-X made of CFC and a copper metal alloy (Photo: IPP, Michael Herdlein)